.Subscribe to the News letter and put some "PINK" in your life :)
>>Click here<<
PUNISHED or not PUNISHED ??
When I was a kid, my sister and I had a disastrous relationship. Close from hatred so often ...

I still remember that, every night, she waited in our mum's bedroom, crying and ready to tell her what I "dared" to do in her absence.

Every night without fail, I was chided, and sometimes, punished.
Every day after school, I took my revenge on my sister ... who awaited the return of "her" mother and so continues this negative cycle.

None of us had the wisdom to stop the game.
Neither had I stopped the revenge,
Nor had my sister stopped tattling, nor has my mother stopped scolding me.

And so it was …until I left home. Not too late, understandably enough!


This story is sad BUT, like many other areas in our lives as adults, we now take care of the wounds of the past, we play back the score, we arrange the sauce, we repeat the film, and MOST OF ALL, we try to break the chain diagrams destructive that repeat again and again...

So in my case, a little scalded, I took a long time (my sister too !!) to have children.

But 33 was arriving with a vibrating alert from the biological clock. I had to leap and hoped "very hard" to have a boy to avoid repeating history ...
Of course, I had a girl ... then, ironically, after the same number of years between my sister and me, another girl:-(

That said, at that time, I had already helped many managers solve their team’s conflicts and I did not intend to dissolve myself in front of two shrimp with dimples  !! 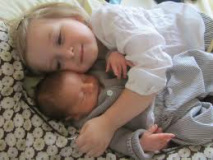 As I believed advice had to be taken from successful people in the field in question ... I asked one of my friends, who was very close to her 3 siblings, how they did it, all 4 for being so close ??

She replied, "there is nothing we do, BUT I remember my mother punishing us all together".

Well, I was not expecting that answer but I applied.

Today, when my daughters fight, I do not intervene. Violence is prohibited but for the rest (within acceptable limits auditory), I feel (with exceptions) absolutely not affected.

When one of them comes to me complaining, the other waits behind, chilly ...

Ahhhh, I then live my "Queen Mother" big moment ...

I feel the power I hold.
I understand a little sadistic pleasure
it would be to play with ...
I am the supreme judge,
the one who, with a gesture, cut the heads.
I am the one who knows and rewards.

That is when I apply ... From QUEEN I become WITCH.

My hair stands on end, my nose is crooked and my fingers become claws.  I then shout at both of them if they are not silent IMMEDIATELY, I punish together.

I also give a nasty punishment (like, for the ones with a sweet tooth: no dessert for 3 days ... I stick to it and they know it) and then I send them away from me, saying that the first I see whithin 30 minutes, will have a stronger punishment.

As a result, within the next second, they go off together, and come to discuss the new common enemy: ME.
And that creates links !!
Here's the trick played ... they are like two victims of a hostile world, and often for consolation, they choose to play together.

And they get along very well.

Yet one is Teen and the other, a sacred demon ...

They give each other gifts for Christmas and birthdays.

It is a pleasure to watch them loving one another :-)

I wish I had more than 2 children,
but no, the universe probably judged
that my ordeal is not over:-))
GUIDANCE HERE